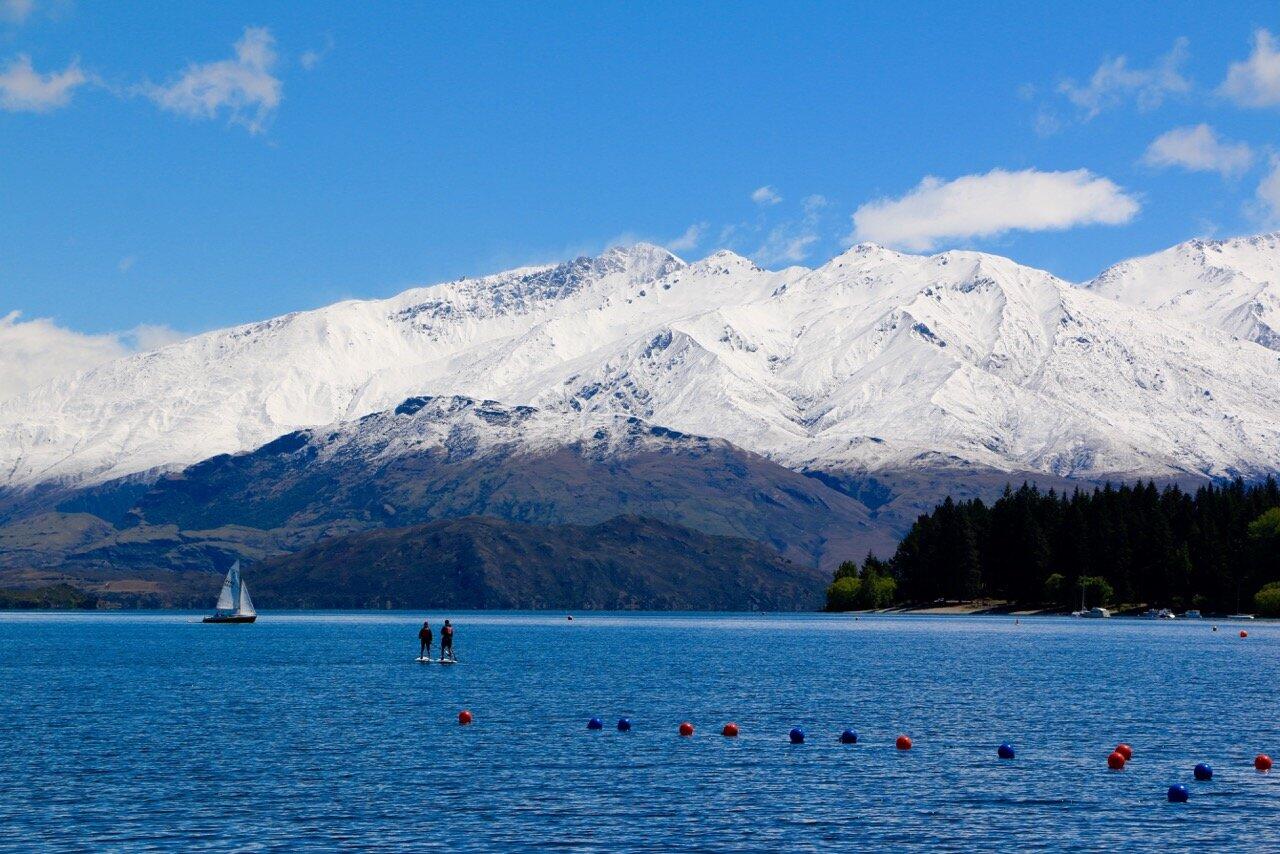 Queenstown Airport, it looks like a background painting, but that's how landscapes look like in New Zealand.
View of the sunset from the Skyline restaurant in Queenstown, New Zealand.
Anchorage Bay beach in the Abel Tasman reserve. A place to meet with nature.
360 view from the top of a mountain on Mou Waho island in Lake Wanaka, New Zealand.
Amazing colors in front of Lake Wanaka, New Zealand.
Seagulls resting in front of Lake Wakatipu in Queenstown, New Zealand.
Through the route in Abel Tasman you will find hanging bridges to cross rivers that flow into the sea.
Shore of Lake Wakatipu in Queenstown, New Zealand.
A tour inside the Abel Tasman national reserve where they leave you on different beaches to walk and meet with nature. Incredible peace to relax with the sea and a spectacular scenery.
On Mou Waho Island we will find a typical bird from there, the Weka, a bird that has no wings because it evolved without no predators.
Ferry that leaves you from beach to beach in Abel Tasman reserve so you can know and walk through them and their surroundings.
If you like trekking, in Queenstown you can do different walks when you are on the Skyline. The walks take between 2 to 5 hours and you can find impressive views.
Milford Sound forests in the Fiordland National Park. Prepare to breathe fresh air!
Vineyards fields in Queenstown. Do not forget to buy your New Zealand wines, they are very good.
Waterfalls at Milford Sound.
Snowy seen from Lake Wanaka.
The Weta, insect originated from New Zealand. It is believed that this insects are 180 million years old.
Forest in Queenstown. Perfect to get lost among them.
Abel Tasman National Park. One of the beaches you can visit is Anchorage Bay. Highly recommended!
Cruise through the fjords and the Tasman Sea. Enjoy breathtaking waterfalls. Milford Sound.
In Queenstown, you must have a few rides in the "Luge", you do not know how much fun it is!
Do not forget to visit the Lonely Tree in Lake Wanaka.
Tour at Mou Waho island on Lake Wanaka.
Incredible view of Lake Wakatipu in Queenstown.

Six Days in NZ - Plenty of Things to See and Do There!

Some Basic information about New Zealand

New Zealand is in Oceania. It is one of the most remote countries in the world, 2000 km away from Australia, in the Pacific Ocean. The country is composed of two large, main, islands and hundreds of small islands around it. New Zealand is famous for its natural landscapes. As a matter of fact, many movies are filmed there to take advantage of them, including the ‘Lord of the Rings’ trilogy and ‘Avatar’. New Zealand’s official language is English, so it is not hard to communicate. Its currency is the New Zealand Dollar, they have an eye-catching traditional warrior-dance called the ‘Haka’, and its favourite sport is the rugby. Go ‘All Blacks’!

I spent six days in New Zealand and let me tell you that the experience was beautiful. I could see snow, waterfalls, forests, beaches and so many photography-award-ready landscapes that it would be really hard to describe in words. I began my trip in Queenstown. I also went to Nelson, Abel Tasman National Park, Lake Wanaka and Wellington, but do not let me get ahead of myself. I will just tell you that, if you are planning to travel to New Zealand, make sure to bring an extra memory slot for your camera because I am sure you are going to need it.

One day in Queenstown

I arrived by plane to Auckland just to take a second plane south-west to Queenstown, in the southern island. It is a nice city for sightseeing and a good place to start a trip to New Zealand. It has all the comforts and adventures of a city, but it is surrounded by natural landscapes that are really hard to find elsewhere. In Queenstown, I ventured to do three things: I used the cable way to reach a tall point from where I could see most of the city and its surrounding areas; I got into some gravity-powered carts called ‘luge’ (and it was so fun I did it twice —one to get used to it and the second to compete) and I went to a nice restaurant to enjoy the sunset. I wish I had more time to spend in Queenstown, but it was OK for a start. I got back to my hotel because on the next day I was leaving for Milford Sound.

Milford Sound, Cascades and a Cruise

On my second day, I was twelve hours outside. I took about three and a half hours to get to Milford Sound, which is in the same island and north-west from Queenstown. The place is extraordinary for sightseeing. You see forests, you see wildlife (there are not any dangerous beasts, do not worry) and, as part of the tour, I enjoyed a nice BBQ that did not really disrupt the experience of being surrounded by nature. In the afternoon, I took a cruise around the fjords, which are passages of water that cross between several cliffs, often remainders of previous glaciers. As you may guess, the views you see in the area are extraordinary. There are quite a few cascades. The cruise even got under one of them (I was forewarned, and now so are you, so if you get wet is because you want to), and it also took us to the Tasmanian Sea. Once the tour ended (I needed three and a half more hours to get back to Queenstown), I went to my hotel so I could get ready for my next trip.

On my third day, I took a bus to Lake Wanaka. It is north-east from Queenstown, in an area called (drum fill!) Lakes District. The first thing I did was to take a walk around and admire the natural beauty of the lake and its surroundings. After a short while, I took a five-hour tour to Mou Waho island, which is in the middle of the lake. Mou Waho is known for being one of the places in which it is easy to see flightless birds called wekas. They are brown, about as big as grown chickens, and native to New Zealand. They did not run away when they saw us, so I am sure they are accustomed to see humans. Once the tour was over, I went to see the blue lakes and the natural pools in the area. Then I went back to my accommodations.

The next morning, I was able to enjoy some of the things tourists can do in Lake Wanaka, including taking a bicycle tour, renting a kayak in the lake, going for a walk around and seeing the lone tree that grows inside the lake. After lunch, I got a bus that would take me back straight to Queenstown airport. My next step was Nelson.

Nelson is in the northernmost part of the southern New Zealand island, and it is the best place where to start a visit to Abel Tasman National Park. I arrived to Nelson the day after and I took a bus to Kaiteriteri in the morning. There, I took a boat that would take us north-west to see Abel Tasman National Park. During the boat trip, we were allowed to choose two beaches. I recommend getting down at Medland Beach and Anchorage Bay. In my humble opinion, they are the most beautiful in the area. I am from Peru, so I was used to see beaches surrounded by deserts. Here, in New Zealand, beaches were surrounded by trees. You will have a great time there.

Wellington and a Rugby Game

On my last day, I went to Wellington, the capital of New Zealand. There are many activities to do there. I walked around the city, I got onto a funicular, I visited its harbour and I visited the Te Papa Museum, where I could see many exhibitions about New Zealand’s culture for free (thank you for that!). There was one more thing I wanted to do before leaving the country, and it is watching a rugby match. That sport is not popular where I live, so it was great for a change. I finished my trip to New Zealand there.

In Queenstown, I recommend getting on the cable way and making a couple of races in the Luge.. They are both very fun experiences. Have a time to eat something at the Skyline restaurant, one of the restaurants with the best view in the world.

In Queenstown, you can also find New Zealand’s most famous burger at Fergburger. People have to queue to buy one.

In Lake Wanaka, go to the Wanaka Gourmet Kitchen and to the Lake Bar. In Nelson, a good restaurant is the Cod & Lobster Brasserie.

In Wellington, find good food at the port. There are several restaurants in the Queens Warf . In the night, go to Cuba or Courtenay street to find bars and cafes.

Check here if you need visa to enter New Zealand.

I strongly suggest going to New Zealand in spring or autumn. It will not be too hot nor too cold, giving you the best experience both if you want to see snowy peaks or if you want to go to the beach.