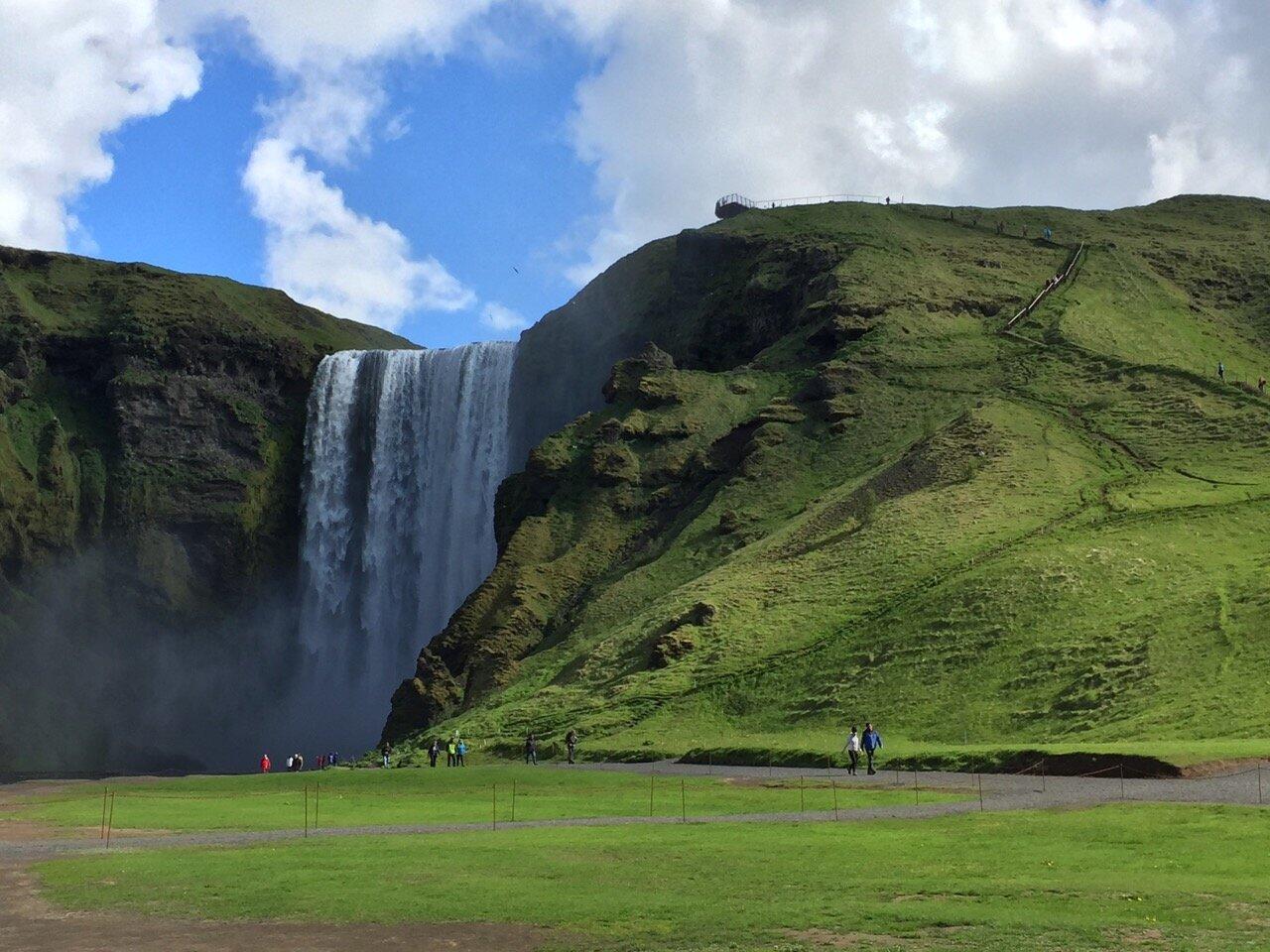 Jökulsárlón glacial during the tour in southern Iceland.
Water fall from the Seljalandsfoss Waterfall in southern Iceland.
View of Pingvellir National Park in Golden Circle tour.
Seems like taken from another planet, Blue Lagoon. Hot springs for relax just 40 minutes from Reykjavik.
Incredible view of Gullfoss waterfalls along the Golden Circle tour.
From Vik town, the southernmost city in Iceland, you can see Skessudrangar, Landdrangar and Langhamrar, giants trolls petrified by the sun's rays as they were leaving their caves. They are also known as Reynisdrangur sea stacks.
Faxi Waterfall, stopover during the Golden Circle tour.
Sunset at Reykjavik port. During the summer season, there is a permanent sunset for 5 hours as it never gets dark.
We will visit Kerid, a volcanic crater lake located in the south of Iceland, part of the tour to the Golden Circle.
Queuing up to buy the most famous sausage in Iceland, Baejarins Beztu Pylsur, is close to Reykjavik city center.
The Icelandic horse is a race that have developed only there. They are horses everywhere. They have the ability to be very resistant to cold and to suffer few diseases.
There is the possibility of hiring boats to make a tour among the glaciers in Jökulsárlón.
When you go to see the Seljalandsfoss waterfall, try to climb up the side of the waterfall so you can have this amazing view.
Wildlife swimming along with the glaciers in Jökulsárlón during the tour to the south of Iceland.
Remember that the aurora borealis can not be seen all year and it also depends on the weather if it is clear. If you want to take good pictures, do not forget your tripod.
In my opinion, the best time to travel is September - October, since we can still find green fields, there is not such a low temperature and we have enough light to see the incredible landscapes and enough night to see the auroras.
In the National Park of Thingvellir you can see how the tectonic plates of North America and Euroasia come together.
The volcanic mountain of Kirkjufell located on the Snaefellsnes peninsula. A classic photo that should be taken in your Iceland trip.
Amazing colors during the sunset in Reykjavik.
Feel the power of water in front of you at the Skogafoss waterfall. You can climb bythe side, but in my opinion, only go up if you have the time for it.
One of the most famous geysers of Iceland, the Great Geysir during the tour of the Golden Circle.
Get to know the Hallgrimskirkja, the church in Iceland, one of the highest structures in the country.
In Blue Lagoon you can have several additional services such as massages, restaurants, even a drink while you soak in the relaxing waters.
The Solfar Sun Voyager off Reykjavík Bay. Something similar to a Viking boat but it is not. Discover it by yourself.

What to Do Besides Seeing Very Unusual Landscapes

Iceland is really a remote place. It is the westernmost and northernmost country in Europe. As a matter of fact, it is closer to Greenland than to its closest neighbours in Britain or mainland Europe. Iceland is known for its natural… er… uncertainties. It is a volcanic land; it has glaciers and geysers; it has craters and waterfalls; and as if that were not enough, its skies often get ornamented with the beautiful northern lights (or auroras). Iceland’s geography is so unique that it is an attraction by itself.

Yet not everything in a country is its landmarks. Iceland is also known for being a country with high education, high man-woman equality, universal health care and very few social issues. Being in contact with such culture is another good experience you get from visiting Iceland. I got to Iceland through Reykjavik International Airport, its currency is the krona, and it may be a somewhat expensive country. Take that into account before travelling.

My Trip to Iceland

Everything began in Reykjavik. After checking in at the hotel and resting a bit from the long trip, I went to see the historic centre of the city. The historic centre is cosy. It has many wooden buildings, it has many details to see, and it is very photograph-friendly. You really spend a nice time there. Then I visited lake Tjornin, in the east, which is famous for all the birds that gather there. At night, I took a four-hour tour to see the auroras (or northern lights). It was a nice experience for a first day.

On my second day, I got ready to see the Blue Lagoon, one of the most popular tourist attractions in Iceland. It has two areas: One is natural and remains untouched. You can only get close for sightseeing. The other is man-made, and there is a nice spa there. Both areas share the common volcanic origin of its waters, giving the Blue Lagoon a stable temperature at the spa and many medicinal properties to its mud. Actually, as part of the geothermal spa experience, you get your body covered in mud (so your skin can benefit from its properties) and you enjoy tasty meals and drinks in the restaurant. There is also a hotel for those willing to spend a night or two there, and optional services like massages. The Blue Lagoon is in the south-west of Iceland, and believe me it was a great experience.

On the third day, I went to the Golden Circle. It is not a place, but rather a tour that takes you around many beautiful landmarks of Iceland territory. I saw the Kerid crater, the ‘golden’ waterfall of Gullfoss (called that way because Gullfoss means ‘golden waterfall’ in Icelandic), the National Park of Thingvellir (famous for its rocky formations, for being very near to the area in which the American and European tectonic plates meet, and for being the place in which the first ‘Althing’ parliament met since the Middle Ages to almost the end of the Twentieth Century), two geysers and a few other sites. Visiting the Golden Circle is a full day experience that begins and ends in Reykjavik, and it is definitely one of the things you must see and do if you travel to Iceland.

On my fourth day, I went south-east to Jokulsarlon. It is a glacier lake, and one of the deepest in Iceland. The area is beautiful because of how it looks, because of how it feels and because of what it inspires you when you see it. It also gives you a couple of surprises, like the beach of dark sand with pieces of ice that look like diamonds, and its fauna, which even includes some seals. There are icebergs in Jokulsarlon, so if you ever wanted to see one close, this place is your safest way to achieve it.

Later that day, I went west to see the Seljalandsfoss cascade. This waterfall is special for every tourist for the three ways you can appreciate it: You can see it from the ground, you can climb the cliff to see it from its top and you can get behind the waterfall too. You will not know how crazy it is until you try it yourself, so I will just say that, if you ever travel to Iceland, visiting Seljalandsfoss is another must to add to your list.

After four days going one place to the next one, I decided to spend my fifth day in Iceland resting in Reykjavik. I went for a walk to see the Church of Iceland (one of the tallest buildings in the country) and the unusual Icelandic Phallological Museum, which contains penises from several species —man included. Some time later, I tried Iceland’s most famous hot-dog, the Baejarins Beztu Pylsur, and I finished my day by visiting Solfar Sun Voyager, which looks like a Viking vessel, but it is not. The icing on the cake was provided by a beautiful sunset in Reykjavik.

I had one more tour to take on my last day in Iceland, so I got up early. I went to the Snaefellsness peninsula. They call it ‘Iceland in miniature’ because it has most of the things you can find in the rest of the country: a glacier, the Snaefellsjokull volcano (which is one of Iceland’s most iconic landmarks) a beach of dark sand, a fishermen’s town and the Kirkjufell mountain. My tour lasted eleven hours from Reykjavik to Snaefellsness and back, but it was worth it.

Do you want to discover more trips from Alonso? Enter to his profile and find more trips to inspire you to visit new destinations.

I recommend Burro restaurant. I has a tasty mixture of Latin American meals and they also open at night as Pablo DiscoBar. If you like Latin music, that is the place to go. If you want something more American, there is another place called the American Bar where you can also dance. If you fancy something more Icelandic, you can go to the port to eat at the Bergsson. Do not forget to try the most famous sausage in Iceland at Baejarins.

In Iceland, everything closes at 11 p.m. on weekdays and at 3 a.m. on weekends.

Visit Iceland in March, September and October, as there is a more chance to see the auroras and as there are more hours of light to visit all the tourist attractions.

Schenguen visa is needed. Check here if you need visa to Iceland.

Northern lights season starts in late August and ends in mid April. It must be night to see them, but there is a chance of not seeing them because of the weather. Keep flexibility in your trip so you can adjust the day you go to see the auroras. You need a clear sky to see them.

From May to August, there is no sunset in Iceland, and from December to February there are only a few hours of light in the day.

You have to know that Iceland is a cold country. You need clothes to warm up even in summer.