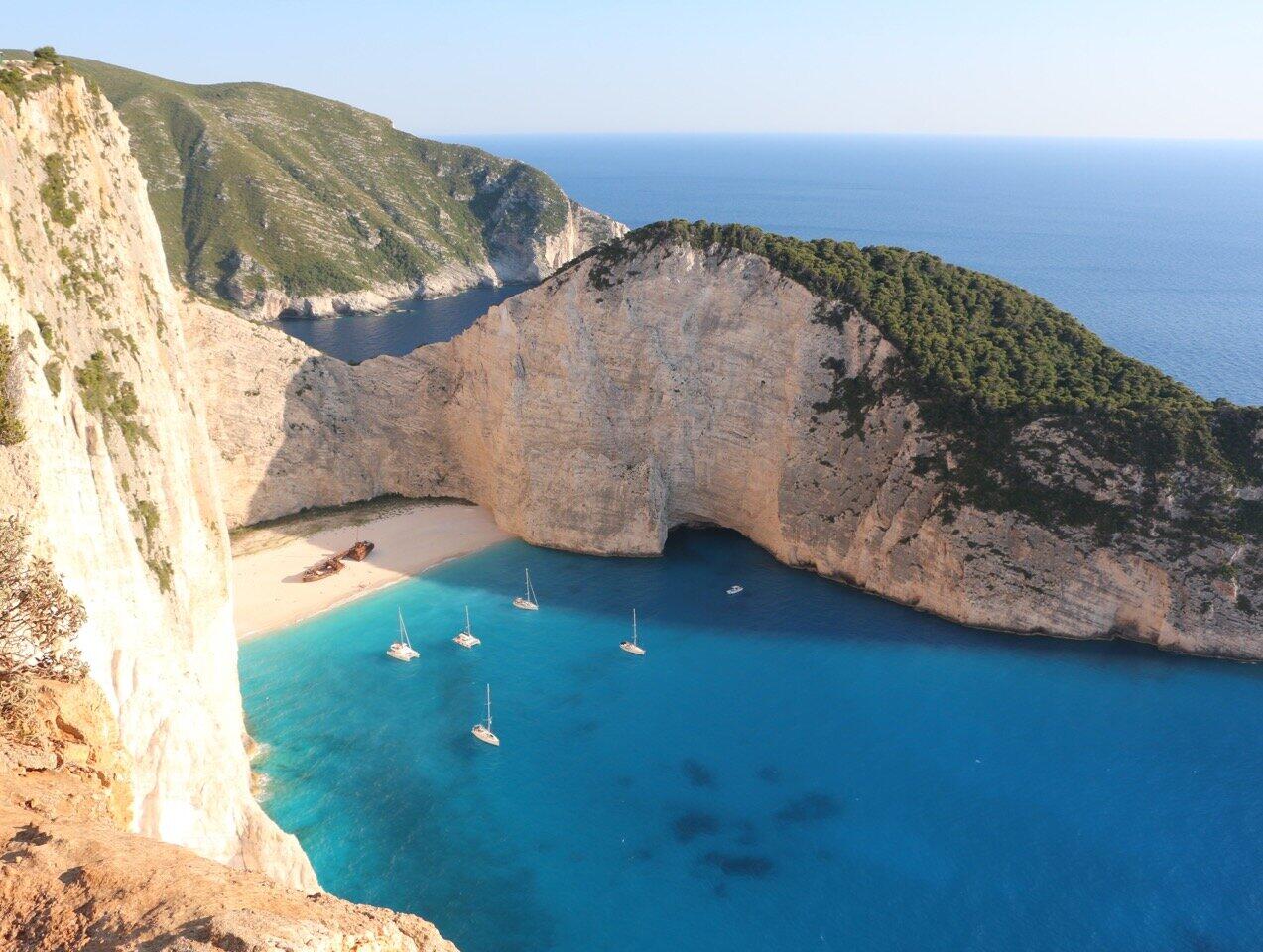 Amazing view of Navagio beach. I imagined one day being there and I did it! Would you do it?
One of the boats that you can rent in Laganas looking for turtles. Be careful in that area not to hit them. You can buy a disposable "cooler" and put your cold drinks to spend the day at the beach.
The Blue Caves in the tour you do when returning from Navagio beach. It will stop there to be able to swim in the turquoise waters.
Cliffs on the beach Navagio. Be careful because there is no protection at the edges. The day before my visit there was an accident with one person. Take care!
With the boat you can rent. You can stop at Marathonasi Beach on Turtle Island.
Down on Navagio beach. The only way to get there is by a boat.
Sunset above Navagio beach. It's worth waiting to see it.
These are the boats that are looking for turtles in the bay of Laganas. Be close to them because they know how to find the turtles.
The famous ship wrecked on Navagio beach.
View of private boats at Navagio beach. The those who can, rent your own boat, manage your times and wait until the beach is only for you.
View of Turtle Island from the back. Close to Laganas beach. Now can you understand why it's called like that?
View of the capital of the island, Zante. It is worth walking through the streets. But be careful with the heat!
Amazing video of Navagio beach in Zakynthos, Greece. As you can see, there is nothing to be safe on the cliff. They are about 800 meters high. A view that worth it.
Picture in the Port Sostis, where you can rent boats to navigate through the waters. At the back you can see Cameo Island, which has a club bar if you want to have fun at night.
Banana Beach. A beautiful beach where you can relax, have a drink and do different water sports.
One of the beaches in the Alykes area. The beach Xigia Sulfur. If you want less people in Alykes, go further north and you will be able to find it.
The famous shipwrek on Navagio beach.
View of Geraka beach. Quiet than Banana beach. Go if you want to relax is its calm waters.

Three Days Relaxing in Beaches… and a Shipwreck

A Little About Greece and Zante

Greece is a famous land. It is not only one of the cradles of civilization; its influence still persists today in several fields of human knowledge, including philosophy and sciences. Most of the people who travel to Greece do it because they are interested in its cultural background: Athens, the Parthenon, Sparta or the ancient gods temples; but Greece has other few wonders to show the world: its beaches.

Zakynthos (also known as Zante) is in the Ionic sea, between Greece and Italy. Unlike mainland Greece, it is not a very famous island, which makes it ideal for vacation travel. In Zakynthos, travellers can enjoy gorgeous white-sand beaches and a few sightseeing spots, namely the Blue Caves in the north of the island and a shipwreck in the west. That may sound a lot of land to travel, but it is not. Zakynthos is a small place, so you can easily get a car and move from one point to another in a reasonable short time. What is best is that Zakynthos has its own international airport, so you can travel there directly. Travellers who want to come from mainland Greece can first go to Kyllini and take a ferry there to the island.

My Three-day Trip to Zakynthos

I spent three days in the island. After arriving to the airport and resting for a short time in my hotel, I went to the first of the three beaches I visited that day: Tsivili beach. There, I saw what I would later confirm in all Zante beaches: that its sand is white and its waters are turquoise and clear. After some time there, enjoying myself, I went to Alykes beach, where I could have lunch in a restaurant. Lastly, I went to Navagio beach to enjoy a wonderful sunset from the top of its cliff.

On the second day, I headed to Agios Sostis, in the south-east of Zante. Besides the pretty beaches you can see there, the area is interesting because of the sea turtles. You see, Agios Sostis is in the middle of the Bay of Laganas, so it is not hard to find the turtles if you take a tour boat. Sailors know where to find them. If you feel in the mood for an adventure, you can also rent a boat and look for them yourself. You would just need to get close to the other boats that already found them (being careful not to hit the turtles, of course).

As Marathonisi Island is also in the Bay of Laganas, my next natural step was to head there. Besides resting in its dreamy beaches, you can visit Keri caves on the south of the island. I opted not to because I was going to visit the Blue Caves the next day, but I leave you the idea here in case you want to go.

In the afternoon, I went to Vassilikos, in the south-east. There are two more beaches there: Banana and Geraka beach. Zakynthos, once again, surprised me with the beauty of its beaches, so I stopped my tourism for that day. I just laid there and enjoyed the sun until time came to go back to my accommodations.

On the third day, I went to the most renown place in Zante: The Blue Caves. They are in the north of the island. It takes a while to get there, but it is worth the wait. Once you arrive, you will understand quickly why it is so famous. The shade of blue in those waters of the Ionic sea is unbelievable; not to mention the caves are navigable, so you can take a look inside and swim a little too. Visiting the Blue Caves is really one of the things everybody should do in Zakynthos —specially if you go in the morning, as the light gets in the caves more clearly than in the afternoon.

Lastly, I went to Navagio beach, as it was close to the Blue Caves. This time, I was not on top of the cliff but straight at the shipwreck. Despite the graffiti, it looks good. I did not ask whether it is OK to go on board, but, still, the beach is so beautiful that I decided to spend the rest of my day there, laying under the sun. I ended my trip in the evening, walking around Zante city and buying a few souvenirs.

Go to Zante between May and mid-October. If possible, avoid July and August, so you can find the beaches less crowded.

Definitely, get ready to activate your mobile phone’s GPS. Streets are not straight in Zakynthos, so it gets confusing. Believe me you do not want to get lost if you are not fluent in Greek.

The best place to buy a SIM card is at the airport.

There are a lot of good restaurants where to eat. For example, there is a famous restaurant in Alykes called ‘Paradosiako’. Just make sure to make a reservation if you are going. In Zante, you may want to go to ‘Yard to Taste’; and at Kalamaki beach head for ‘Vinaz Resto Bar’ or the ‘Massa Mediterrenean Cuisine’ The former opens up to late at night, so it is your place if you want a few drinks. Those willing to meet many English people and party should go to the Laganas Road. The street is full of restaurants, bars and discos.

When you rent the boat, get a cooler or ask the company if they can lend you or rent you one. That way you can buy things to eat and drink, and spend four perfect hours sailing. That could save you paying for a lunch as well.

Schenguen visa. Check if you need a visa for Greece here.

The car rental value is divided between two people for the 3 days, which is a total of US $ 76 (US $ 38 per person). An additional cost of US $ 20 dollars in gasoline is calculated. That´s US $ 10 additional per person.

If you rent a boat to go see the sea turtles, be careful not to hit them. Respect the speed limits and follow the yellow boats, because their crew knows well where to find those pretty reptiles. Also, try not to forget going to the Keri Caves and bathe in its crystal-clear waters.